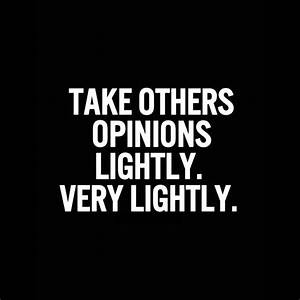 ‘Tell them to shove their opinions up their arse’

‘Yes, yes, of course, I will. I don’t care about their opinions I’m going to carry on regardless, I will tell them to do exactly that. As if I care what they think’

However, here’s the challenge, no matter how high ‘they’ shove their opinions up that particular orifice, their opinions still shine out loud & proud, accompanied by the bright light that undoubtedly pours out in abundance from the same unholy origin.

It seems to me, once an opinion has escaped from the (sometimes), unaware ‘I say it like it is’ gob of the opinionated person, it solidifies as a cast-iron albatross around the neck. Now be honest, at least with yourself, before you scoff at my obvious direction. Are you really oblivious to what people say? Are you really unconcerned with what people think of you? Are you really that thick-skinned that nothing penetrates your hide? If your answer is yes to all three questions then you are of a divine, unearthly disposition and I bow down to your omnipotence. Nevertheless, as wowed as I am, I plead with you to read on regardless because the next time someone is perturbed by an unsolicited opinion, simply bleating ‘tell them to shove it up their arse’ may not be adequate advice because for most of us it distracts our thinking, our peace of mind and sometimes entire trajectory. In Samuel Taylor Coleridges’s poem ‘The Rime of the Ancient Mariner’, a sailor who shoots a friendly albatross is forced to wear its carcass around his neck as punishment for his crime. There lies the irony of opinion, we often wear them around our neck, weighing us down from light inconvenient poundage, to an overwhelming, soul-crushing burden and every unit of weighty baggage in-between but why should we be punished since no crime has been committed. In other words, it is almost entirely uninvited. The distraction of opinion could be the recipient’s problem rather than the spout from whence it was borne.

I think it would be prudent to first discuss the source and why, (in my humble opinion), people have opinions and for the record, I obviously don’t mean opinions that you potentially requested ‘what do you think of my new hairstyle?’ if the answer to that common question is ‘it’s not your best, it makes you look fatter’  then, it’s kind of tough. If you ask for an opinion be prepared to get an answer which may not satisfy, the ‘I want to feel good, I want to be complimented, I want you to build my inconsistent self-esteem, which still isn’t convinced this hairstyle is for me. I’ve just got this horrible, niggling feeling it’s making me look fat, so please tell me otherwise’   insecurity angle for asking in the first place.

Of course, let’s not forget there are good opinions too but I don’t give a damn about those, considering I’m discussing the ‘Law of Distraction’ at least how it exists and envelopes my easily distracted little world. In the future, I will lay out the ‘Laws of Distraction’ but let’s not be distracted right now.

It seems to me, regardless of IQ, upbringing, social status and mental health every living person has a virtual trigger in their frontal cortex, nestled between the part of the brain that solves problems, is responsible for spontaneity, memory, language, initiation, judgement, impulse control & social and sexual behaviour, I will name that virtual trigger the ‘Actual Reason Stupidity Exists‘ (its sheer coincidence the acronym is A.R.S.E), and of course, one may argue it’s one of the few qualities that separates us from the animal world and makes us human, the predominant inhabitants of the planet, albeit it’s namely opinions, that have trashed the Earth since mankind brazenly trundled out of the sea, decided to stand and discovered that the ARSE area of the brain allowed them to express whatever they wanted to say, with the potential of toppling entire civilizations, stimulate pogroms and generally be downright hurtful to others. The ARSE trigger has clerical superiority over the rest of the frontal cortex, particularly in its ability to wipe out memory, crumble judgement and urinate on social etiquette, whilst releasing a short squirt of serotonin, alienating one from the consequences but pleasuring them with a limited burst of glee.

We all possess the ARSE trigger, we all manipulate it and every one of us has probably motivated it to discharge a superabundance of opinions, whether they were required or not. I suspect the only difference is some of our AT’s (ARSE triggers), are slightly flaccid to the steamrollering strength of social etiquette, which thankfully crushes our opinions or at least decants them, before they wantonly come trickling from our ever so frisky mouths. Distressingly, many people have such an omnipresent AT that once it’s energised it obliterates any of their natural, frontal cortex walls and out it pours, drenching its subject with the most unwelcome stench of opinion.

So, whenever you are the unfortunate recipient of a derogatory AT outpouring, the important things to remember are;

Unwanted opinions are inherent behaviour, suggesting they are generally unavoidable, especially where one’s intellectualism is punctured by their need to be heard, possibly fulfilling a facet missing from their (maybe, lightweight), lives, ergo it’s our reaction to them and their ARSE conceived opinions that are the key to remaining underwhelmed, rather than acutely distracted from our path’s. Naturally, this is far easier said than done, I should know, considering I am ‘forever distracted‘ by the hoards of opinions that are consistently spewed my way. In the majority of cases, as my personal history and experience would dictate, some of the perpetrators either have exceptionally meaningless existences, their social behaviour has been unlearnt and reinvented to resemble mischievous chimps that are amused by flinging their own faeces, or maybe it’s just envious sporadic urination, vainly attempting to establish once again, their little territory and protect their unstabilised worlds, where meaningful intelligent reactions, careful planning & business-minded strategies were clearly not a valid option.

Hey, it’s only an opinion! and obviously, they can shove theirs up their ARSE!

4 Replies to “Distracted by Opinions”